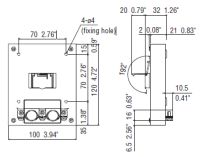 Satellite communication is bidirectional telecommunication between two ground stations via a satellite. Similar to cellular radio, it runs from a transmitter to the receiving device and back.
The advantage of satellite communication compared to terrestrial networks is that the connection from the Canary Islands to the Chinese border, for example, can be used simultaneously under a single satellite footprint and thus geographically widely distributed network nodes and users of voice, data and video can be reached.